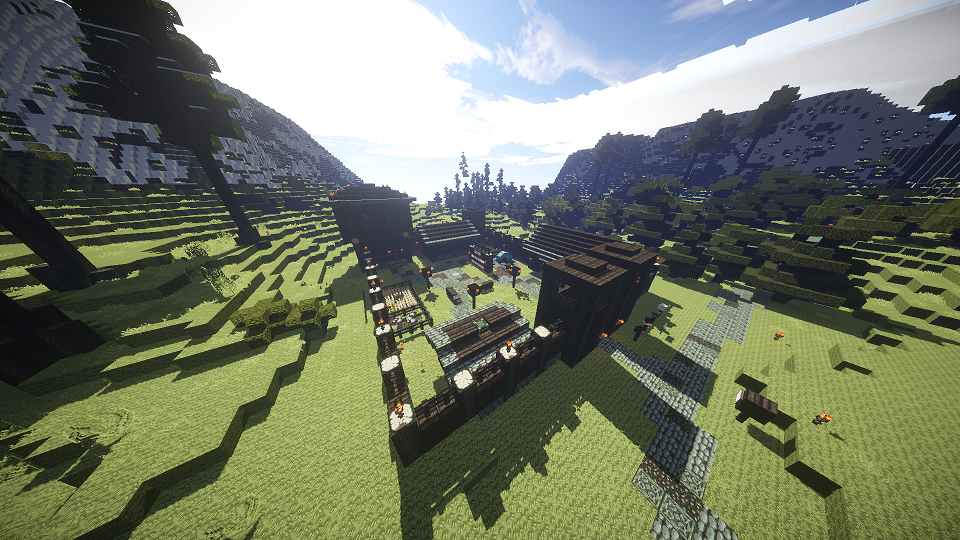 The first ever spawn area, created on the 1.0 edition by Flameo at the request of Fireball to attract new players to civilization rather than leave them to wander the wilderness.

RE Survival, officially the Reconstruction Era Minecraft Server refers to a series of Minecraft communities hosted by Reconstruction Era. Taking different forms over the ages, each of these servers has incorporated a certain amount of new joins in addition to RE regulars. A common thread uniting them is the establishment of towns or nations, reflecting the heterogeneous and political nature of Reconstruction Era.

The city of Atlas after being griefed. Flameo's house, a public farm, and Fireball's factory are all visible.

This server had relatively low population and a custom map.

OldManMammoth was the emperor of the Mountain Federation, a valley where most players lived with Atlas city as the capital. Fireball was his right-hand man, creating factories and technologies as a bureaucrat in Zenith Industries. The kingdom would flounder until Flameoguy came and built a normal house, causing property values to multiply tenfold. There were other nations built by other communities, such as CharlesPanzer's authoritarian regime in the snow biome known as Estoasau Uus Riik or Estosausa, which was commonly called Wolfstein. Chrobo had a settlement called Viridia where with buildings based on Final Fantasy 11's San d'Oria. There was also an attempt by Fireball to have the V0tgil community colonize an adjacent valley to boost the Mountain Federation's population.

The server would end when someone griefed everything and there were no backups. The next server would be created shortly as an attempt to start anew. 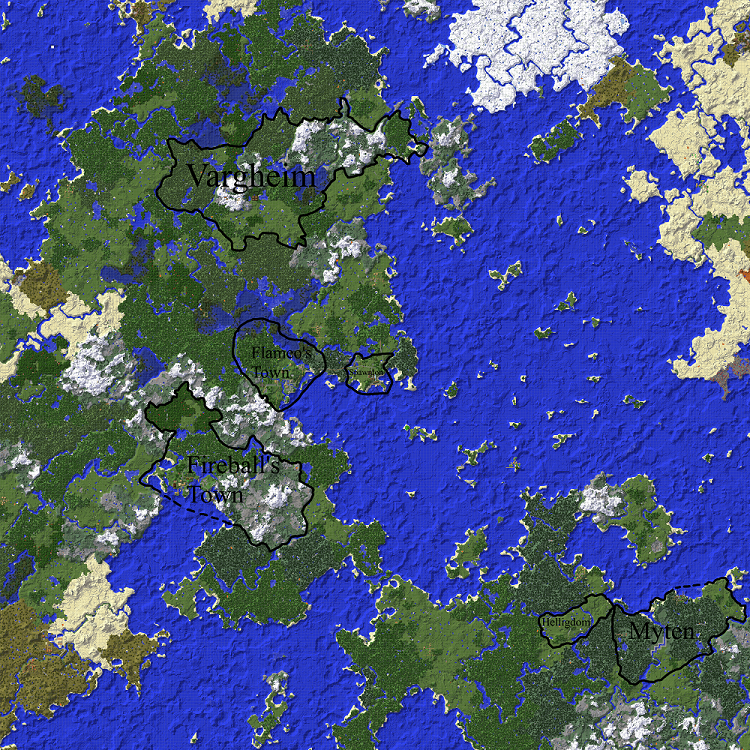 This server was played during 2018 and was one of the most successful servers in terms of playercount. The spawn area was a protected zone with paths leading to different independent towns.

Weston was Flameo's town. It was situated near spawn on the road west and was an early stop for new players exploring the server. The server was flooded with members when Flameo posted the server IP on /v/ in an attempt to get help building the town. While a few of these users built in town and heavily contributed to its construction, many others spread over the landscape.

Pompeii was a settlement where Sling and Fireball lived. It was settled by some of the 4channers from /v/, and the waterfront was heavily developed. Across from the main town was a Japanese-inspired district. Fireball would begin a much-maligned canal project by cutting a 20-block gap through a mountain. The canal reached a lake that was connected to Pompeii by a diagonal river. The river was gradually widened, allowing multiblock ships to be brought into Pompeii, albeit with a lot of effort and mess.

Maze66 built a nation called Myten. Most of the members were communists brought from civ servers.

There were a few smaller settlements built by 4channers and hermits, such as Kenya Not's island. Most of the 4chan users would quickly leave when Kenya banned one of them for saying the n-word, and none of them remain on RE today.

The Tay Drama would begin when a member of the community called Kodiak donated for a custom recipe. The recipes were not added due to an error on the part of Fireball, who didn't see the donation and assumed that the recipe she sent over discord was merely a suggestion. Kodiak saw this as a sign of hostility, and brought other community members to her side against the staff. A major fracture in the community would occur when a map reset was brought up, with Kenya Not pushing for a map with new aquatic update features and Flameo pushing to retain the current map. Eventually Kodiak was banned and the server declined in activity.

Here's that one time Sling caused Chernobyl and completely destroyed his base.

There was a nice little town called Riverbee with elevated train tracks and tanks. Sling blew up his base by sticking a nuclear reactor in the wall. StrawberryCrisis had a little home nearby.

The threat of nuclear war was always present but generally people kept to themselves.

View inside the spleef arena built by Flameo and Kenya. Pictured on the opposite side is one of Flameo's college friends.

Spawn rail station, showing the three rails and a glitched login on the skyrail.

This server started on the earliest available version of multiplayer Minecraft (in alpha) and advanced versions every week. It was a solid gimmick for exploring older game content, although in practice the server didn't last long enough to get to recent versions and due to the nature of minecraft maps only alpha terrain would be available near spawn.

Freddo built a town which was connected to the spawn valley by a cobblestone road. Flameo and Kenya built castles on opposing sides of the spawn. In the middle of the valley was a spleef arena, which had to use dirt because snow wasn't available in the game. It had a glass roof for spectators and a pit for defeated players. A flat region was clear beside the valley for testing primitive redstone contraptions.

Eventually a minecart railway would be built connecting the castles, spawn area, and Freddo's town. There was a small central station immediately left of spawn, with three rails. One was a skyrail that crossed the valley to Kenya's. Another went past the redstone building area and to a terminal station in Freddo's town. A third was imcomplete and would go past spawn out over the sea. 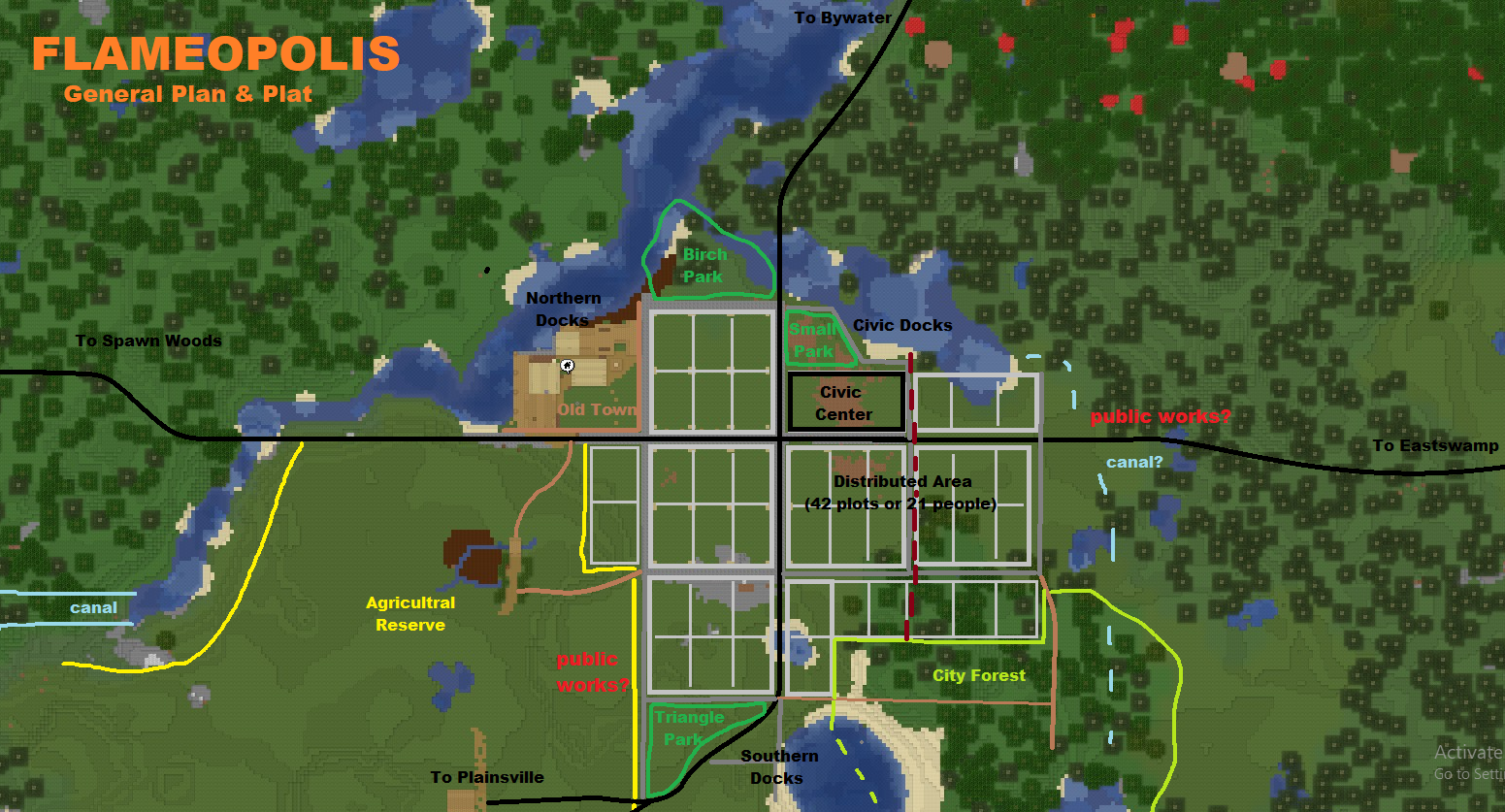 42-plot plan for Flameopolis, dated September 7th 2020. Many of these plots would go unused, so measures were taken like replacing the six middle plots with a plaza.

The September 2020 revival of RE survival was very low-key. Rather than a big public server, the staff created a smaller space to hang out. There were a few attempts at advertising but the big floods of players from before ended. By this time, the nation roleplay aspect of survival was all but finished, although Flameo did declare himself a prince and write a few 'laws'.

There were basically two towns: A plot-grid city near spawn called Flameopolis and a farm owned by Ace and Sling. There wasn't much conflict, with Freddo building a railroad between the two. Flameopolis generally had the larger population and its playerbase would grow and shrink over time. Eventually Kenya Not and Flameo would build a spleef arena under a glass town square, which was faced by numerous buildings. Antea was something of a cop since she was the only one with diamond armor.

Generally this iteration was pretty quiet, with the only players being people personally invited from Discord to build in town. There were a few incidents such as the black plague epidemic and the bamboo strife, but the peace was largely kept. This instance would die off from inactivity as people moved on with things.

This server was initially created in 2021, but had few people playing on it. Flameoguy and Click built a farm together, while Fireball made a base in a cave grotto. The spawn area was notably a snowy wasteland, causing the few players to be very spread out compared to the centralized towns of before. The server would end up lying empty within a couple months.

The server would be revived in the Fall of 2022 by Flameoguy as a leftcom server for a different discord community called The Underground Leftcom Bloc. While the server was still hosted on RE, the MOTD was altered calling the server 'the commodities firm' and a new icon was used indicating the communist theme. Kenya Not would be involved in setting up the spawn area, but the majority of players did not come from RE. The spawn-town was situated between a mountain and a steep riverbank, and would include numerous little districts such as Leftcompton, Democratic Kampuchea, and the Kolkhoz. The Mountain would be officially known as Mt. Bordiga but a faction of militant Albanians living on the slopes would call it Mt. Enver.

This server, set up during late summer 2022, used the FTB Ultimate: Anniversary Edition modpack for 1.16.5. The spawn area had a few large industrialized bases, such as the Vietnam mines, a factory farm for chicken dinner, and Flameo's Immersive Engineering base (also called Galt's Gulch). Topaz and Antea would set up a magic base called The Owl House, connected to the main town by a portal. Comrade and Spitfire built a warlord empire in the woods nearby. Fireball pioneered a computercraft chat network called MineNet which constantly experienced outages. Jabbe was considered the King of Vietnam since he built the first rice kingdom in spawn.

A few skirmishes would occur between the New Vietnamese people and Comrade's Horde, with disputes over territory and resources.